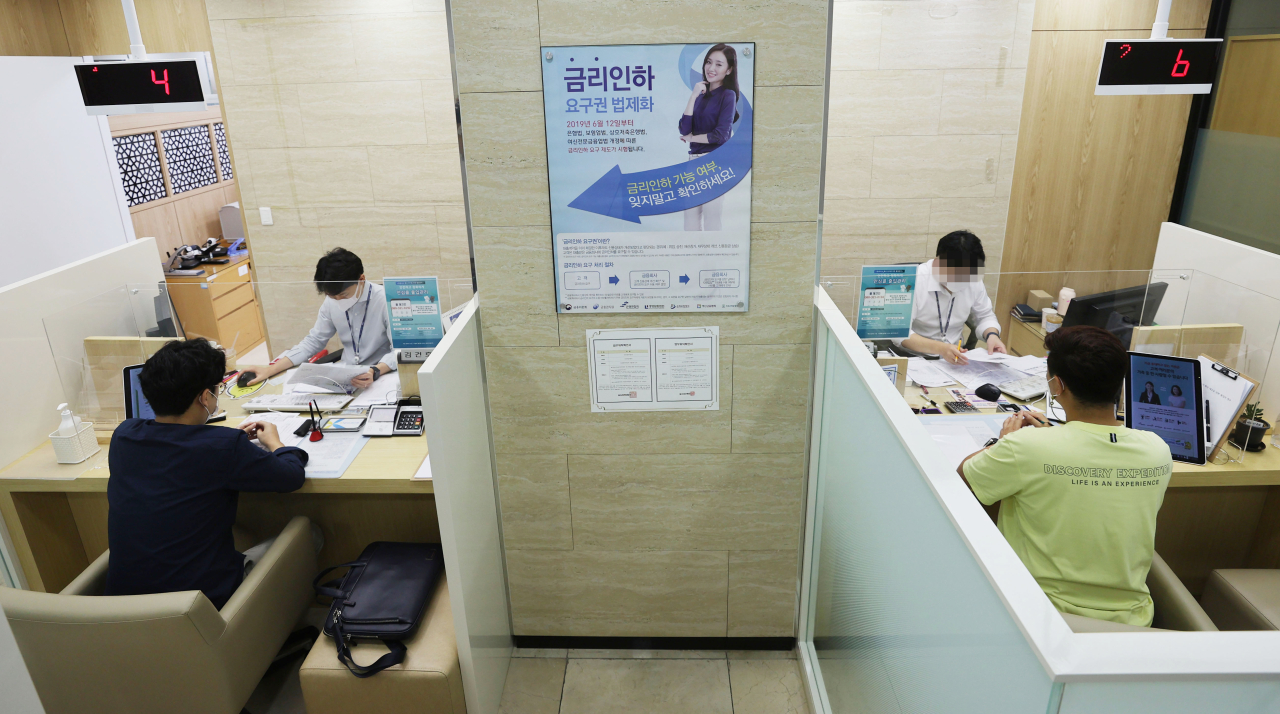 Customers consult bank workers at a bank in Seoul. (Yonhap)

The Financial Supervision Service sent a message to the Korean Federation of Savings Banks on August 20, urging its member companies, which include savings banks and mutual financial cooperatives, to limit the amount of each credit loan to annual income of an individual borrower, sources said.

The FSS noted that household loan demand remained high, supported by abundant liquidity in an environment of record interest rates, they said.

Typically, the savings bank’s limit for personal loans is between 100 million won and 150 million won ($ 85,000- $ 127,000). Financial authorities plan to closely monitor the efforts of second-tier financial institutions to tighten requirements, with the aim of keeping the growth of second-tier bank household loans below the 21 percent level.

Just as a balloon expands elsewhere if you squeeze it, households looking to borrow money have increasingly turned to savings banks, credit unions, or community credit unions.

According to FSS data, the volume of household loans issued by second-tier financial institutions in the first half of this year increased by 21.7 trillion won from the end of last year.

Since July, FSC policy has enforced a stricter formula for mortgages, called the debt service ratio, which determines how much borrowers must pay in principal and interest in proportion to their annual income.

Under the new rule, which only applies to first-tier banks, borrowers are required to repay 40% of their annual income if they purchase homes worth more than 600 million won in designated speculative areas.

In response to the financial authorities’ tighter lending regulations, the National Federation of Agricultural Cooperatives, the parent company of NongHyup Financial Group, recently decided to temporarily stop offering “group loans” to its financial cooperatives, which include cooperatives of agricultural products and livestock products. cooperatives, while tightening its current 60% debt service ratio.

Group loans are made en masse to a number of borrowers belonging to certain groups who have applied for the same real estate transaction, without an individual credit rating.

Meanwhile, some criticize the government’s efforts to ease household debt concerns, including people who have rushed to take out bank loans to make ends meet amid the pandemic.

â€œNot all debtors invest borrowed money in buying a house or stock. For small traders and low-income households hit hard by the protracted COVID-19 pandemic and economic fallout resulting from it, bank loans are the last resort, “said an industry source. noted.

Credisense, a credit decision platform, has partnered with Mambu to accelerate the modernization of lending …